Once upon a time, an advertising: The Rolls-Royce “Jules-Paris Match” on the Paris Dakar 1981 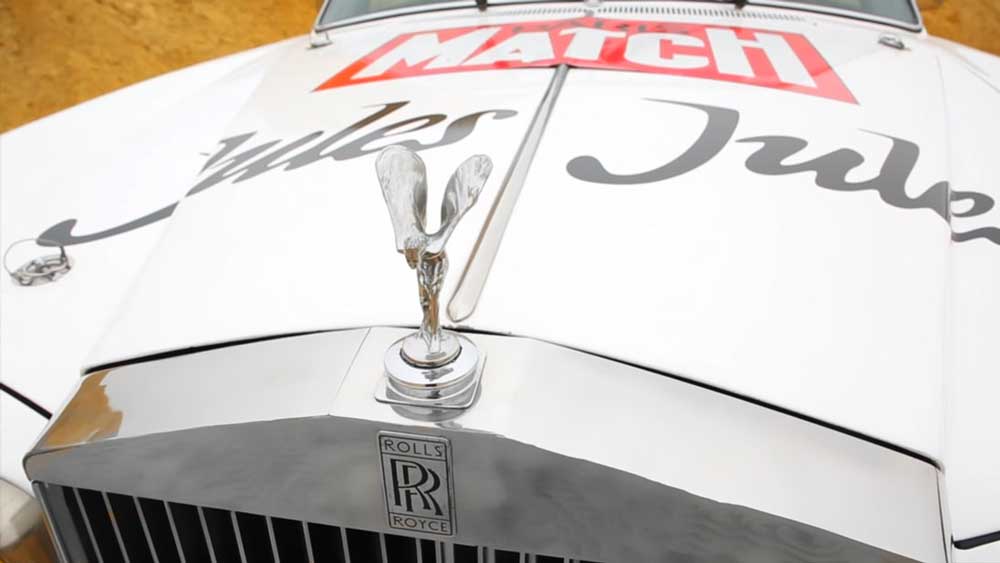 The astonishing vision of this Rolls-Royce, sponsored by Dior for its perfume Jules and by the famous magazine Paris-Match, participating in the 3rd edition of the Paris Dakar in 1981.

A snapshot of a fantastic time when setting off for this mythical car competition in a Rolls-Royce on a whim with a bunch of gentlemen and friends was simply possible!  All sponsored in record time by prestigious brands.

THE STORY BEHIND THE ROLLS-ROYCE “JULES” AND ITS CREW

The story began one summer evening in 1981, during a good meal between friends Thierry de Montcorgé, Jean-Christophe Pelletier and Jean-François Dunac; the latter mentioned the repeated problems with his Rolls-Royce Corniche.

“That bitch, we’ll make her die in the desert! And the bet is on!  All this, “Watered down with Pomerol, so as not to advertise”.

The next day, finally, the idea is not so bad… No sooner have the steps been taken than the project finds its main sponsor, the prestigious house of Mr Christian Dior, fashion designer and perfumer.

“You are totally crazy – but I agree!”

The Christian Dior External Relations Director of the time 1981.

In three months, the Rolls was ready to face the Sub-Saharan desert.  After a laborious preparation requiring the intervention of another colleague, Michel Mockrycki, the French V8 specialist, who took them to California to find an engine more reliable than the original English one.

“It tastes & smells like a Rolls, but in reality it’s a Toyota!”

THE BRANDS THAT SPONSORED THE ADVENTURE

It is important to remember that la maison Christian Dior, now 74 years old, was a true institution evoking the prestige of French haute couture.

From haute couture to perfumes, cosmetics, watches, jewellery… Over the years, Dior has been able to develop its image in many creative fields. And whatever the field, excellence is there.

“For the house of Dior “the Jules perfume” was an enormous nerve!”

Jules perfume is a brand and a product of la maison Christian Dior launched in 1980. A full-bodied, very masculine, chic and authentic fragrance. The nose behind this fragrance is Jean Martel. The top notes are Lavender, Caraway, Mugwort and Bergamot; the middle notes are Carnation, Rose, Basil, Sandalwood, Jasmine, Cyclamen and Cedar; the base notes are Oak Moss, Leather, Musk, Fir, Amber and Tonka Bean.

Why did Dior decide to take this gamble?

“The name Jules was a big bet for Dior, when we decided to name the perfume Jules, it was a huge nerve! Why not continue in the same vein and do the Paris Dakar.”

” Cheeky to cheeky – we had to go all the way and we were very, very successful!”

This was an unprecedented operation at the time, especially for Christian Dior, which was not used to this type of motorsport event.

It was an incredible success for the Rolls that crossed the finish line, but also a great communication operation for the main advertiser with 1,600 articles in the French and foreign press, and more than 150 television and radio appearances.  Today, Jules’ Rolls-Royce would have brought in the equivalent of 3,000,000 francs in media space. -Joelle Demange (former head of external relations at Christian Dior).

Today, DIOR is undoubtedly one of the brands that best expresses what luxury is, thanks to creativity and rigour in the service of novelty, opulence, sensitivity and uniqueness.

Paris Match was there … The famous French weekly news and image magazine, founded by the industrialist and press owner Jean Prouvost and by Paul Gordeaux in 1949, needs no introduction.

It has its origins in an older title, Match, a sports weekly created in 1926 by Léon Bailby and taken over in 1938 by Jean Prouvost, who transformed it into a news magazine the following year.

A news magazine, Paris Match covers national and international news, looking for the “scoop” in pictures.

“The weight of words, the shock of photos”

This slogan made a lasting impression. As a good journalist, its inventor Jean Cau (writer, journalist, 1961 Goncourt Prize for his novel La Pitié de Dieu) ), had succeeded in capturing and synthesising the impact of a message in two simple and powerful ideas. In January 2008, the weekly adopted a new motto, “La vie est une histoire vraie” (Life is a true story), as the newspaper entered into a more passionate relationship with its readers.

In 1976, the magazine was taken over by Daniel Filipacchi, a former photographer and a major newspaper owner. Roger Thérond returned as editorial director, a position he had already held from 1962 to 1968, and which he would not leave until 1999. Under his leadership, Paris Match regained its early success. The man nicknamed “L’Œil” retired at the age of 74 and was succeeded by Alain Genestar in July 1999.

History & purpose of Paris Match https://fr.wikipedia.org/wiki/Paris_Match is now a Lagardère Group title via the Lagardère Média News branch. Paid circulation in France reached over 633,000 copies in 2008.

Are such adventures now unfeasible? Undoubtedly more difficult to set up (…) As mentalities have evolved with today’s society, have we lost that touch of madness which had so much charm and panache?

Maybe not … There are still a few diehards who are ready for the adventure in style!

Like Le Vendôme 80, a rally bringing together a maximum of 80 exceptional cars produced in the 1980s. These classic cars are displayed on the Place Vendôme before driving to the Loire Valley and its castles, including the Chambord castle, which will welcome the crews for a sumptuous evening. The adventure will end on 12 September in the town of Vendôme.

“Le Vendôme 80″ total look rally is a unique jubilant experience, a trip back to the 80’s with the discovery of the most beautiful roads, the most beautiful historical sites and private chateaux of the Centre Val de Loire region. The best post-Covid remedy!”

-Emmanuel de Brantes (Author, journalist, scriptwriter and founder of the Association for the Promotion of French Excellence)

Ask for a special offer for your brand & company on an ultra-luxury route? >Sponsoring & reservations

Advertising agency providing brand and media strategy consulting at all points of contact.

Founded in 2016, by Pascal Wouters, L’Agence de PUB is a young agency claiming a “Creative” DNA, handing over creative values and a passion for brands converging towards a strategic media focus integrated and adapted to the brand. mainly in omnichannel allowing to reach 360° strategies, supported by Inbound, growth marketing, content marketing, using influence marketing. Imbued with startup methodologies (the lean startup), this small agency dreams of being a 21st century agency – while putting people at the centre. The agency grows by collaborating mainly with highly specialised partners & freelancers in order to achieve a more flexible growth in line with the current trend.

Need an agency for your communication? Contact us at L’Agence de PUB: info@lagencedepub.be

This website uses cookies to improve your experience when browsing the website. Of these, cookies categorized as necessary are stored on your browser as they are essential for the functioning of basic functionalities of the website. We also use third-party cookies which help us analyze and understand how you use this website. These cookies will only be stored in your browser with your consent. You also have the option of deactivating these cookies. But disabling some of these cookies may affect your browsing experience.
Necessary Toujours activé
Necessary cookies are absolutely essential for the website to function properly. These cookies ensure basic functionalities and security features of the website, anonymously.
Functional
Functional cookies help to perform certain functionalities like sharing the content of the website on social media platforms, collect feedbacks, and other third-party features.
Performance
Performance cookies are used to understand and analyze the key performance indexes of the website which helps in delivering a better user experience for the visitors.
Analytics
Analytical cookies are used to understand how visitors interact with the website. These cookies help provide information on metrics the number of visitors, bounce rate, traffic source, etc.
Advertisement
Advertisement cookies are used to provide visitors with relevant ads and marketing campaigns. These cookies track visitors across websites and collect information to provide customized ads.
Others
Other uncategorized cookies are those that are being analyzed and have not been classified into a category as yet.
Enregistrer & appliquer