“Music begins where the power of words ends.” – Richard Wager

In 1969, Eric Lipmann of the Publicis Group made the first of many commercial spots for Dim, featuring five girls dancing in tights to the famous tune of Lalo Schifrin’s The Fox. For the time, such boldness was unusual, which is why this spot became a must-see. But what role did the soundtrack play in all this? Why do you think the audience remembered the brand name so well?

Music has always accompanied us by influencing our moods and some of our behaviour. Many scientists have tried to demonstrate this phenomenon: take for example Nicolas Guéguen, a doctor in social psychology who carried out a study proving that customers in a shop are more inclined to buy if they are exposed to a song they like. As far back as the 13th century, travelling merchants used to sing songs to promote their products, but it was not until the birth of radio that music really emerged in the world of advertising.

After the invention of television, the trend began to increase, as it became possible to superimpose music on images so that they are perfectly synchronised. The first French commercials were broadcast following a decree signed by George Pompidou in 1968, although they were only allowed in three sectors – food, household appliances and textiles – and were subject to the control of the Régie française de publicité, which was responsible for enforcing ‘decency’ criteria. However, these were revisited in parallel with the resounding success of the Dim advertisements, which unknowingly pioneered not only social liberation but also artistic liberation by highlighting the considerable importance of musical choice in television commercials.

The FOX, a tune that stays in your head

Music has a mnemonic and distinctive function. Many nursery rhymes have been written to help children memorise them. When exposed to music, the human brain is stimulated in different areas: language, motor skills, emotions, etc. Hence the advantage of giving a sound identity to your brand. It’s a trendy concept, yet salespeople have been using sounds to help potential consumers identify and recognise their products for much longer. Dim has taken up this idea in style. Had they not reinterpreted The Fox in their subsequent campaigns, many viewers might not have been able to relate to the old ones and the name might not have stuck in people’s minds as much. By choosing to adapt the same music for each new spot, the company created a kind of advertising saga that is impossible to forget. And now, when someone listens to this famous piece composed by Lalo Schifrin, it is certainly Dim that they associate it with first!

Advertisers know how much music can influence a person’s mood. They are also aware of its sensory power: to convey an idea or express a feeling, the choice of a few notes is sometimes much more effective than a long speech. When it comes to promoting a perfume, for example, the preference is generally for bewitching and sensual music, as evidenced by the track Deceive used in the Givenchy ad, which shows a girl in a long evening dress walking through the streets of Paris to a secret place where everything is allowed. The creators of this campaign chose such a style of music because this is how they want to illustrate the brand identity of the perfume and create attachment. This is how Dim has managed to seduce its audience: by innovating and renewing its spots, while preserving the same identity thanks to the song The Fox, re-orchestrated and rearranged for each new release. Now, who doesn’t feel a wave of nostalgia when watching these campaigns, even the most recent ones?

More than a distinction, ad music has become almost inevitable. Advertisers can no longer imagine the success of a campaign without a perfect musical selection. In fact, some spots border on the masterpiece and increasingly seek to generate interest through trendy music or well-known artists. This is a strategy that PepsiCo has used many times, taking advantage of big names in pop culture such as Britney Spears, Beyoncé or Michael Jackson. The more things go on, the more the directors see things in a big way, and fortunately!

How do you create such emotions? And above all, how can we anticipate them? In response to these questions, new marketing tools are being developed to enable agencies and their clients to measure the influence of advertising on prospects. Among them is Feelin, a small start-up that sends newly created advertisements to targeted members of its community in order to evaluate the different impressions. Such a process makes it possible to determine the effectiveness of these campaigns and to make any necessary changes in the event of poor results. A good way to know if the chosen music has a good impact!

So what are the possibilities for the future? How do you think music for advertising will evolve? Towards sounds, experimentation, ASMR? Or towards a return to the nostalgia of rock, funk and pop? That’s what we’ll discover in tomorrow’s ads 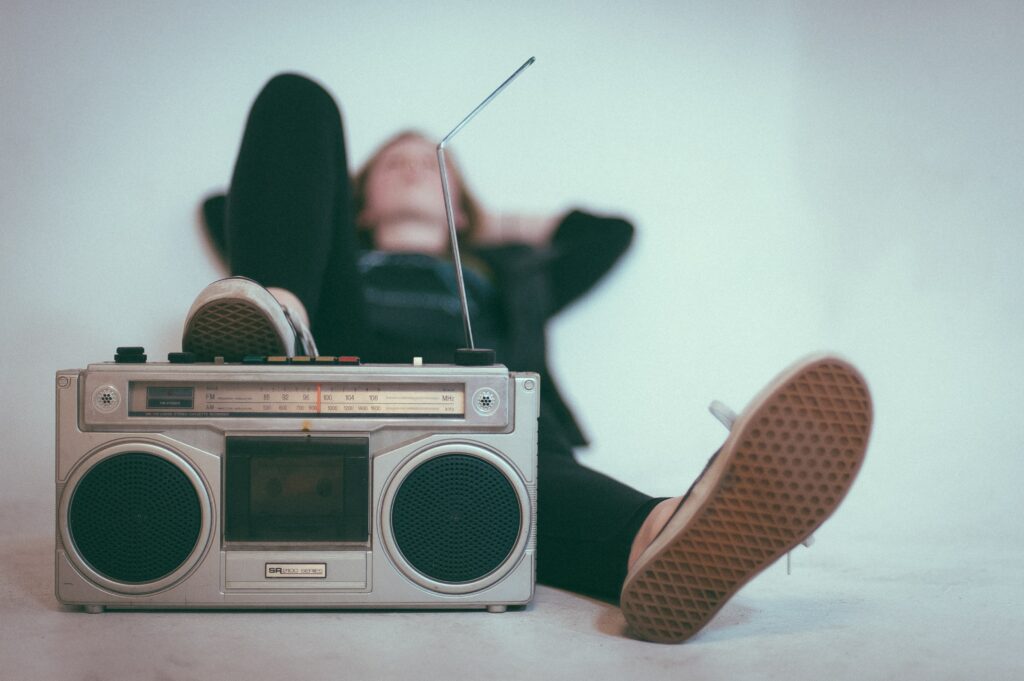 @lagencedepub entered for the @hub.brussels awards

This website uses cookies to improve your experience when browsing the website. Of these, cookies categorized as necessary are stored on your browser as they are essential for the functioning of basic functionalities of the website. We also use third-party cookies which help us analyze and understand how you use this website. These cookies will only be stored in your browser with your consent. You also have the option of deactivating these cookies. But disabling some of these cookies may affect your browsing experience.
Necessary Always Enabled
Necessary cookies are absolutely essential for the website to function properly. These cookies ensure basic functionalities and security features of the website, anonymously.
Functional
Functional cookies help to perform certain functionalities like sharing the content of the website on social media platforms, collect feedbacks, and other third-party features.
Performance
Performance cookies are used to understand and analyze the key performance indexes of the website which helps in delivering a better user experience for the visitors.
Analytics
Analytical cookies are used to understand how visitors interact with the website. These cookies help provide information on metrics the number of visitors, bounce rate, traffic source, etc.
Advertisement
Advertisement cookies are used to provide visitors with relevant ads and marketing campaigns. These cookies track visitors across websites and collect information to provide customized ads.
Others
Other uncategorized cookies are those that are being analyzed and have not been classified into a category as yet.
SAVE & ACCEPT