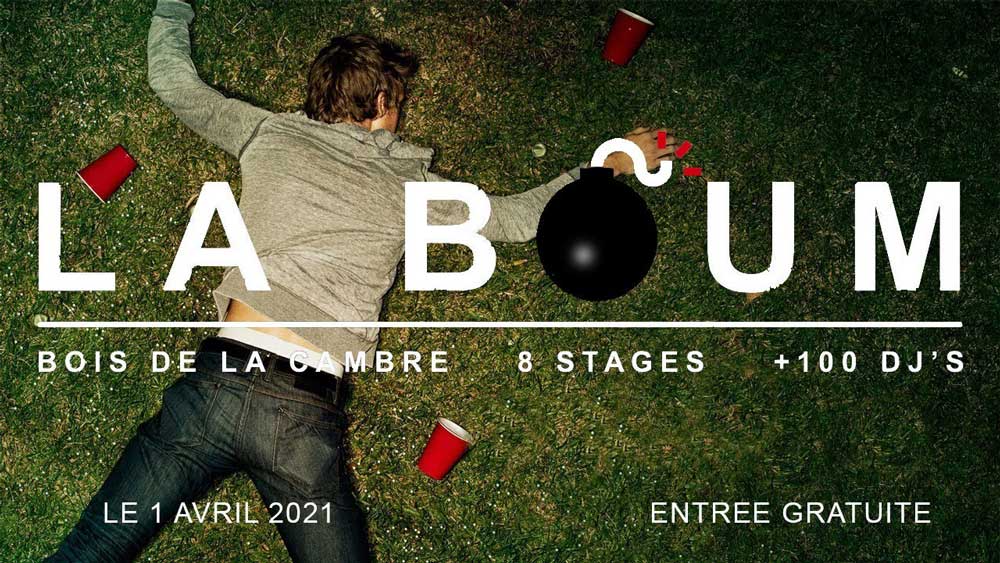 Everything started on 7 March with the creation of a simple Facebook event. La Boum festival in the Bois de la Cambre, announcing a crazy programme with more than 100 internationally renowned DJs on several stages.

A Belgian phenomenon, since its creation, the number of participants and interested persons have increased steadily to reach 69.5 thousand people in the run-up to 1 April 2021!

Everyone contributed with a humorous post on the event page.

Even we at L’Agence de PUB believed it for a moment … We booked a tent, chilled the drinks, prepared the food …  The Stones had said YES !

If we look a little closer at this Facebook event, apart from its date “April 1st”, its context in this period and above all its incredible programme, we quickly understand the impostures.

“A real Facebook event, for a fake event”, that made the Belgian pOPULATION dream a little, tired of more than a year of COVID measures.

Creating an event on Facebook is “child’s play”, but managing to fill up with interested participants in less than a month is quite another matter.

There is a large diversity, rather representative of the Belgian society.

The engagement around the event was exceptional in 1 month’s time. Thousands of shares, comments and likes …

With hundreds of publications from the community humorously extending the virtual context of the pseudo festival.

Not to mention the spin-offs in the traditional media which amplified the effect of the false event.

The final hours after the blackout & deletion of thousands of posts on the original event page.  Hundreds of clone events popped up on Facebook before the fateful hour that would bring together a few thousand young people in the Bois de la Cambre in Brussels.

To give you an idea, a Tomorrowland facebook event “Weekend 1” in Boom, Belgium – summer 2019 had a participant audience of

Don’t forget to keep track of your appointments with this true festival of Belgian origin which offers an exclusive electro programme of almost unrivalled quality anywhere in the world in a good spirit and without any risk.

For the record: The numbers on the ground (battlefield).

At the end of the day on 1 April 2021, more than 2,000 young people peacefully made their way to the lawns of the Bois de la Cambre, welcomed by a veritable small army of police officers on foot, horseback, fire engines, buses, lorries, motorbikes, bicycles and helicopters… almost as numerous as the participants.

By the way, for the ecology so dear to the young generations, a nice expense & carbon footprint, and a massacre of the fauna and flora of the Bois de la Cambre, fortunately Greta Thunberg was not present!

We’ll ask her since we haven’t heard from her in a while. -What do you think about this Ms Thunberg? facebook page https://www.facebook.com/gretathunbergsweden ?

There were even drones flying over the young festival-goers broadcasting messages of dissuasion, including the one to “get out of the way”, as if the tone was set and the fall on form even higher in terms of the evolution of relations with our good old belgian police.

And even the cavalry charged the crowd – hitting a half-naked young woman in the battlefield!

In the meantime, a reassuring testimony on the state of health of the young woman whom we greet in passing: “I had just been sprayed by a fire engine, so I was already stunned. I spontaneously took off my shirt to wring it out because it was a bit cold. But I didn’t even have time to turn my head when the cavalry rode over me,” she said on Facebook. Source: LaLibreBelgique

At the end of this “battle” worthy of a Waterloo 1815, a good twenty people were injured, thirty or so were deprived of their freedom, and there was also a fair amount of material damage.

On the ground there are independent media such as BAM – Belgian Alternative Média*,  Kairos presse, Belgium united for freedom (…)

A new type of journalism is actively developing, mainly broadcast on social networks, often live on the initiative of citizens. They are more and more on the ground like war reporters covering the siege of Sarajevo. Showing us a “raw” reality, less emptied of its substance, in front of the traditional media all on the same monotone.

“Do the so-called mainstream media have an ethical responsibility to citizens? “Are independent media the future of journalism?

Where is the line between government propaganda and journalism? according to Edward Herman’s and Noam Chomsky’s analysis of the US mass media.

*BAM: Not to be confused with Belgian Association of Marketing which is the largest marketing association in Belgium. An open community that has brought together the members, initiatives and expertise of STIMA, BDMA and IAB Belgium to create a new and unique contact and exchange platform.

Follow also La Petite Radio, an independent participatory media project, which expresses itself for the moment in relay (sharing), witness of its time in “no comment” mode through images. La Petite Radio is looking for #COLLAB & #PARTNERS: journalist, cartoonist, host, editor, photographer, cameraman(woman).

Performed by Minouche Barelli Song written and composed by Serge Gainsbourg Presented at the Eurovision contest in 1967, the song brought Monaco to the 5th place! An honourable result for a song that everyone has forgotten!

Who are the organisers of the La Boum?

“Basically it’s more of a surrealist movement, a this is not a pipe a la Magritte”

– The masked organisers of The Abyss

Is a sequel planned? The famous collective L’Abîme has announced the organisation of a new event in the Bois de la Cambre on 1 May 2021.

The event seems to be as successful as the first one with already more than 21K people interested in the concept and 6.5K saying they want to participate.

Open answer to the open letter from the Minister of the Interior:

The collective said on the eve of 1 April that they had plans for the future, and their intention was soon made known in reaction to the open letter from the Minister of the Interior.

The date of 1st May

This date coincides with the call by the hotel and catering sector to reopen its doors on the same day, in addition to the usual trade union demonstrations linked to the Labour Day (…)

Meanwhile, the Minister of the Interior considers May Day too early The Minister of the Interior, Annelies Verlinden , says she is open to dialogue, according to her office, however: “The date of May Day is a bit too early to organise such an event, but she is open to dialogue. Nevertheless, in order to have this dialogue, you also need to know who to talk to. “

Without being a prophet, this promises a beautiful zizanie my Gauls!

An agenda to be followed …

Advertising agency providing brand and media strategy consulting at all points of contact.

Founded in 2016-17, by Pascal Wouters, L’Agence de PUB is a young agency claiming a “Creative” DNA, handing over creative values and a passion for brands converging towards a strategic media focus integrated and adapted to the brand. mainly in omnichannel allowing to reach 360° strategies, supported by Inbound, growth marketing, content marketing, using influence marketing. Imbued with startup methodologies (the lean startup), this small agency dreams of being a 21st century agency – while putting people at the centre. The agency grows by collaborating mainly with highly specialised partners & freelancers in order to achieve a more flexible growth in line with the current trend.

Open answer to the open letter from the Minister of the Interior, Mme Annelies Verlinden.

“Your mission, if you accept it, Madam Minister, since you have offered us your help, is to grant us official authorisation as well as a date for the organisation of a BOUM 2 in the Bois de la Cambre and, if you deem it necessary, to propose sanitary rules that would take into consideration the opinions of specialists, some of whom believe that the risk of this kind of event is minimal and yet so vital to our youth. Wouldn’t this be a nice tribute to the sacrifices we made for our elders”, says the press release from the L’Abîme collective, which adds that it “does not deny the congestion of hospitals” but does not want to “ignore the negative impact of confinement on the entire population”, judging “liberticidal laws” and speaking of “police repression” and “use of fear”. “We also ask for justice to be shown clemency for our comrades who have been punished by the police for the simple crime of having been present at the Bois de la Cambre and of having faced the disproportionate repression of which they were witnesses and victims”, the collective adds to the attention of the Minister of the Interior. Before adding that L’Abîme “only coordinates a popular and natural desire to gather and party”.

Need an agency for your communication? Contact us : info@lagencedepub.be

Get the L’Agence de PUB token for a free consultation

@lagencedepub entered for the @hub.brussels awards

This website uses cookies to improve your experience when browsing the website. Of these, cookies categorized as necessary are stored on your browser as they are essential for the functioning of basic functionalities of the website. We also use third-party cookies which help us analyze and understand how you use this website. These cookies will only be stored in your browser with your consent. You also have the option of deactivating these cookies. But disabling some of these cookies may affect your browsing experience.
Necessary Always Enabled
Necessary cookies are absolutely essential for the website to function properly. These cookies ensure basic functionalities and security features of the website, anonymously.
Functional
Functional cookies help to perform certain functionalities like sharing the content of the website on social media platforms, collect feedbacks, and other third-party features.
Performance
Performance cookies are used to understand and analyze the key performance indexes of the website which helps in delivering a better user experience for the visitors.
Analytics
Analytical cookies are used to understand how visitors interact with the website. These cookies help provide information on metrics the number of visitors, bounce rate, traffic source, etc.
Advertisement
Advertisement cookies are used to provide visitors with relevant ads and marketing campaigns. These cookies track visitors across websites and collect information to provide customized ads.
Others
Other uncategorized cookies are those that are being analyzed and have not been classified into a category as yet.
SAVE & ACCEPT